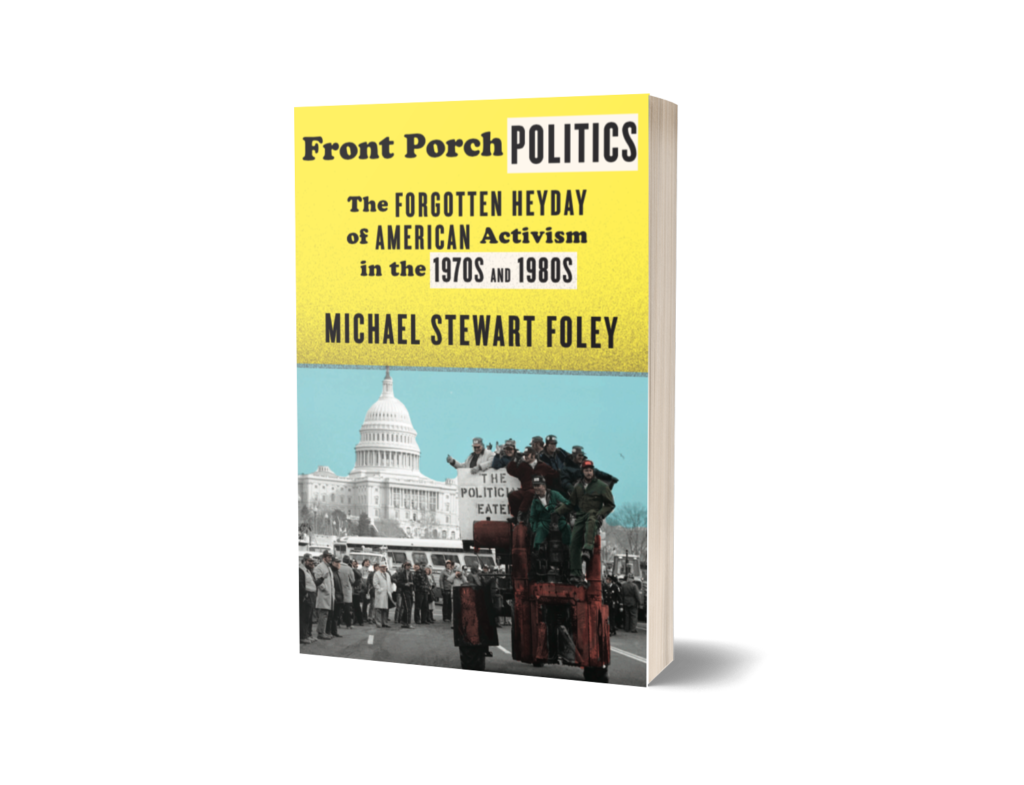 Front Porch Politics: The Forgotten Heyday of Activism in the 1970s and 1980s

The 1960s are widely seen as the high tide of political activism in the United States. According to this view, Americans retreated to the private realm after the tumult of the civil rights and antiwar movements, and on the rare occasions when they did take action, it was mainly to express their wish to be left alone by government—as recommended by Ronald Reagan and the ascendant New Right.

In fact, as Michael Stewart Foley shows in Front Porch Politics, this understanding of post-1960s politics needs drastic revision. On the community level, the 1970s and 1980s witnessed an unprecedented upsurge of innovative and impassioned grass roots political activity. In Southern California and on the Lower East Side of Manhattan, tenants challenged landlords with sit-ins and referenda; in the upper Midwest, farmers vandalized power lines and mobilized tractors to protect their land; and in the deindustrializing cities of the Rust Belt, laid-off workers boldly claimed the right to own their idled factories. Meanwhile, activists fought to defend the traditional family or to expand the rights of women, while entire towns organized to protest the toxic sludge in their basements. Recalling Love Canal, the tax revolt in California, ACT UP, and other crusades famous or forgotten, Foley shows how Americans were propelled by personal experiences and emotions into the public sphere. Disregarding conventional ideas of left and right, they turned to political action when they perceived, from their actual or figurative front porches, an immediate threat to their families, homes, or dreams.

Front Porch Politics is a vivid and authoritative people's history of a time when Americans followed their outrage into the streets. Addressing today's readers, it is also a field guide for effective activism in an era when mass movements may seem impractical or even passé. The distinctively visceral, local, and highly personal politics that Americans practiced in the 1970s and 1980s provide a model of citizenship participation worth emulating if we are to renew our democracy.

"Reading this book revives the spirit of civic action today for those who are unjustifiably forlorn about overcoming injustice."—Ralph Nader

“A useful, vibrant account of a neglected chapter in our activist history.” —Bill McKibben, founder of 350.org and author of The End of Nature

“A bold, ambitious work that offers a refreshingly vivid reinterpretation of American politics during the 1970s and 1980s . . . Foley’s book will doubtless inspire a new generation of scholars to revisit this fascinating era.” —American Historical Review

“Front Porch Politics offers a panoramic view of Americans who joined a variety of social movements in the two decades after the 1960s . . . [Foley] offers rich and textured accounts of closely drawn portraits of activists who were engaged not with electoral politics but with drawing attention to what they perceived as neglected and unjust conditions in their communities . . . The author has done historians a service by weaving the strands of disparate works of secondary scholarship into a sweeping and accessible tapestry . . . Foley offers a vision that scholars would do well to consider as we begin to piece together the quarter century of growing inequality since the end point of his study.” —Timothy Stewart-Winter, Journal of American History

“In this remarkable history, Michael Stewart Foley makes the case that [the 1970s and 80s] cannot be understood in terms of a simple partisan shift from left to right, or liberal to conservative. Nor, he suggests, can these years be seen as a time of quiescence or retreat. Instead, they were characterized by an intense, angry, and impassioned style of activism on issues that spanned the political spectrum . . . Foley's book is packed with vivid accounts of the battles he covers, many of which will be unfamiliar to readers today.” —Kimberly Phillips-Fein, Dissent Magazine

“In Front Porch Politics, Michael Stewart Foley illuminates an era of creative populist organizing that needs to be remembered and emulated. This is a wise and gracefully composed book—and essential reading for anyone who cares about the past and future of democracy in America.” —Michael Kazin, author of American Dreamers: How the Left Changed a Nation and editor of Dissent

“Michael Stewart Foley is one of our best historians of Americans' long experiment with democracy. In Front Porch Politics, he demolishes the myth of post-1960s political exhaustion and gives us instead a fascinating account of grassroots politics in the 1970s and 1980s, an era when millions of Americans fought for a moral capitalism and social equity.” —David Farber, author of The Rise and Fall of Modern American Conservatism

“In this beautifully written, highly readable account, Michael Stewart Foley takes us on a journey into the small towns, cities, suburbs, factories, and farms where Americans of all political stripes became what Foley calls ‘accidental activists.’ These were men and women who, in response to upheavals within their own communities, collectively created a robust civic culture that has been—up until now—largely forgotten. This is a wonderful book that should permanently lay to rest the claim that the 1970s and 1980s were decades of simple conservative domination or political quiescence.” —Natasha Zaretsky, author of No Direction Home: The American Family and the Fear of National Decline, 1968–1980