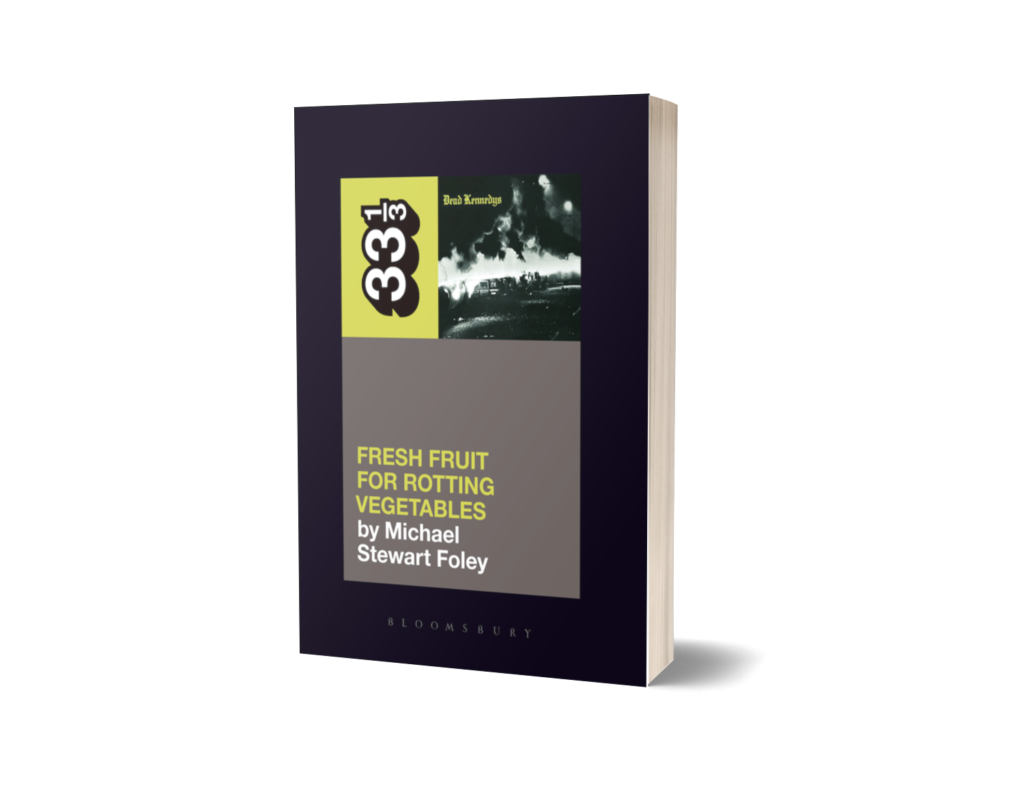 In 1978, San Francisco, a city that has seen more than its share of trauma, plunged from a summer of political tension into an autumn cascade of malevolence that so eluded human comprehension it seemed almost demonic. The battles over property taxes and a ballot initiative calling for a ban on homosexuals teaching in public schools gave way to the madness of the Jonestown massacre and the murders of Mayor George Moscone and city supervisor Harvey Milk at the hands of their former colleague, Dan White.

In the year that followed this season of insanity, it made sense that a band called Dead Kennedys played Mabuhay Gardens in North Beach, referring to Governor Jerry Brown as a "zen fascist," calling for landlords to be lynched and yuppie gentrifiers to be sent to Cambodia to work for "a bowl of rice a day," critiquing government welfare and defense policies, and, at a time when each week seemed to bring news of a new serial killer or child abduction, commenting on dead and dying children. But it made sense only (or primarily) to those who were there, to those who experienced the heyday of "the Mab."

Most histories of the 1970s and 1980s ignore youth politics and subcultures. Drawing on Bay Area zines as well as new interviews with the band and many key figures from the early San Francisco punk scene, Michael Stewart Foley corrects that failing by treating Dead Kennedys' first record, Fresh Fruit for Rotting Vegetables, as a critical historical document, one that not only qualified as political expression but, whether experienced on vinyl or from the stage of "the Mab," stimulated emotions and ideals that were, if you can believe it, utopian.

“Michael Stewart Foley's Fresh Fruit for Rotting Vegetables is a must read not only for punks young and old, but for anyone who has ever felt even the slightest revolutionary pang in their soul … Through interviews with Jello Biafra, East Bay Ray, and Klaus Fluoride (as well as many other important figures close to, or in the scene at the time) and a mountain of research, Foley puts together a book that is academic, personal, informative, and most importantly, convincing. For those already familiar with Fresh Fruit for Rotting Vegetables, this book further solidifies its greatness among records in any genre. For those new to the album, this book provides an extensive and comprehensive look into a body of work whose release exploded on the scene because of the pressures caused by the era, events, and people that all came together to create it.” –  Matt Caltabiano, Under the Rader

“Wish all books dealing with 'Punk Rock' were as well researched as this one!” –  V. Vale, Editor, Search and Destroy

“In his book on Dead Kennedys' 1980 debut, Fresh Fruit for Rotting Vegetables, historian Michael Stewart Foley traces the origins of the radicalized California punk band's political views by chronicling all the turmoil in the late 1960s and into the 1970s, as the hippie ideal curdled into the Me Generation … what truly separated the Kennedys from their peers-and what transformed their angst into something powerful and useful-was the humor with which they tackled current events, as singer Jello Biafra in particular understood that a wicked sense of irony was the only weapon against a world that had grown so insane.” –  Stephen M. Deusner, Pitchfork

“There have been a handful of punk albums covered in the series … and they tend to be stand-outs. That remains true with this release, which may now be my favorite in the entire series … [Foley's] tone is pitch-perfect, reflecting both his academic training and his punk rock roots, producing the equivalent of a scholarly spit-ball that complements the pissy intelligence of the DKs' masterpiece. His writing is effortless, even when he is flexing his intellectual muscles … As I read Foley's book, I found myself constantly re-listening to the album with fresh ears, my appreciation and admiration of it growing every time.” –  Kevin Dunn, RazorCake

“An accomplished historian with an appreciation for the punk ethic, Foley sketches the social and political conditions of the late 1970s and the band's take-no-prisoners response to them. He's also alert to San Francisco's distinctive punk scene and its unapologetically political stance. His essay is a welcome complement to the extensive literature on the city's utopian mood and music of the 1960s. … Very worthwhile.” –  Peter Richardson, San Francisco State University

“Give it some time and Michael Stewart Foley's book on Dead Kennedys' Fresh Fruit for Rotting Vegetables will probably rank among the best of the 33 1/3 series. It's a fine portrait of politics that gave birth to the Bay Area punk scene, all the while tracing a counterculture throughline from the Yippies of the 60s to the punks of at the beginning of the '80s. Dead Kennedys sneered in the face of both Ronald Reagan and Jerry Brown, and also at the birth of New Wave, which presented new sonic possibilities but also a crass mellowing out into palatable pop chart fodder once it was co-opted by the mainstream.” –  Hubert Vigilla, Ruby Hornet

“…an incisive blend of urban history, socio-political witnessing, and pop culture insight. Peeling back the band's mythos, [Foley] deftly sorts through family backgrounds, the countercultural movements of the 1960s and 1970s, and the nuanced and fecund microcosm of San Francisco during punk's genesis, all at a breathless pace. The book is compact, yet exploratory, dense as well as poetic … Foley balances the eyes-wide-open vibe of a fan's journal with his strenuous academic precision, so readers feel immersed in, but not overwhelmed by, the incendiary band's tale.” –  David Ensminger, Houston Press

“Full of compelling portraits of key players, trenchant musicological and visual cultural analysis, and rich journalistic-cum-historical depictions of the state of California and San Francisco politics at the end of the 1970s, Foley's book is a success that will appeal both to scholars and to fans. In unveiling a portrait of the Dead Kennedys and punk as creators of 'a soundtrack of collective resistance' (p. 9), Foley not only rescues San Francisco punk from the condescension of posterity, but provides a model of how to write historically about youth subcultures and popular music.” –  Timothy Scott Brown, Northeastern University, USA, The Sixties: A Journal of History, Politics and Culture